Several Facts about the Easter Holiday

The egg toss game was a tradition that churches used to observe back in time, and this was similar to the game of hot potato. In this game, the priest will chuck a hardboiled egg to any of the boys in the choir present. Then the choir boys will then start tossing the egg at each other and when the clock strikes 12, the one who has the egg would be considered the winner. He will get to keep his prize.

This specific goddess was known for fertility and spring festivities though people believed that Eostre was also linked to two other items that Easter is well-known for — eggs and hares.The word “Easter” was derived from the name of Eostre, an Anglo-Saxon goddess; the information was mentioned by author Bede in his book back in the 8th century.

The idea of the Easter bunny offering candies and eggs is known to have begun in Germany during the Middle Ages. Others also believe that the Easter bunny first appeared in the United States together with German immigrants and brought their tradition called the “Oschter Haws” or the “Osterhase”; and in this custom, children created nests where rabbits and hares could lay their coloured eggs. This is the festival of Eostre who was known as the goddess of fertility. It was also claimed that she had a rabbit as an animal symbol.However, there is also a theory that says that the symbol of the rabbit originated from a Pagan tradition.
Almost half of the states in the US banned the act of dyeing chicks during Easter. Though just recently, Florida overturned the said law and now prevents dyeing not only chicks, but all animals.
Annually, the White House hosts an Easter Egg Roll event on Easter Monday. This tradition began in 1878 by President Rutherford Hayes.

Easter Sunday is one of the most festive symbols of hope and rebirth. It is also said that the resurrection was to bring people together and closer to their God so this was achieved with Easter. In the Christian religion, Easter is celebrated to remember the resurrection of Jesus Christ.

Easter Sunday and Monday are both national holidays in the Netherlands. This is because it is considered as a first and second Easter Sunday just like their two Christmas Days. The week continues until Tuesday. Although Good Friday is an official national holiday, it is not a mandatory day off for commercial businesses.
Chocolate Easter eggs were introduced only in the early 1900’s. Before this, people exchanged gifts of stuffed cardboard eggs or decorated chicken eggs instead.

Have you ever wondered why the dates of Easter vary every year? Easter is based on the lunar calendar and the position of the moon. Easter is celebrated on the Sunday following the full moon after the 21st of March so that is why it varies. 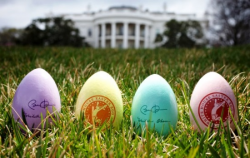 In Tosca, Italy, the largest chocolate Easter Egg was made in 2011; its height was 34 feet and weighed 7,200 kilograms. This was measured in April 2011 at the Le Acciaierie Shopping Centre, in Cortenuova, Italy. Now that is a big Easter Egg !

Several European nations follow a tradition of starting an Easter bonfire; this is called Easter Fire and is known to represent fertility. This also acts as a sacrament in memory of the Resurrection of Jesus.
The white lily is known as a sign of resurrection and is also considered as the celebration’s special flower for Easter.

This Easter, give a box of twenty-four Original Copters that come with Whistlecopter’s exclusive Viper Launcher and 7-inch red rubber bands. This display box includes twenty-four assorted colours of gift tubes. Each Gift tune contains an the Original Copter and an extra wing and battery!! The cost for the box of 24 is $50 !!

Each of these Whistlecopter gift tubes also come with an additional wing and battery. Only the Original Copter has the exclusive red rubber band and this is used for these to reach its maximum height of 250 feet when launched. Also, the designs of each Original Copter’s wings vary, making these more unique and more fun for the family. Check out our Professional Wing Folding video below to attain the highest flights!